Co-habiting Couples and Taxation in Ireland 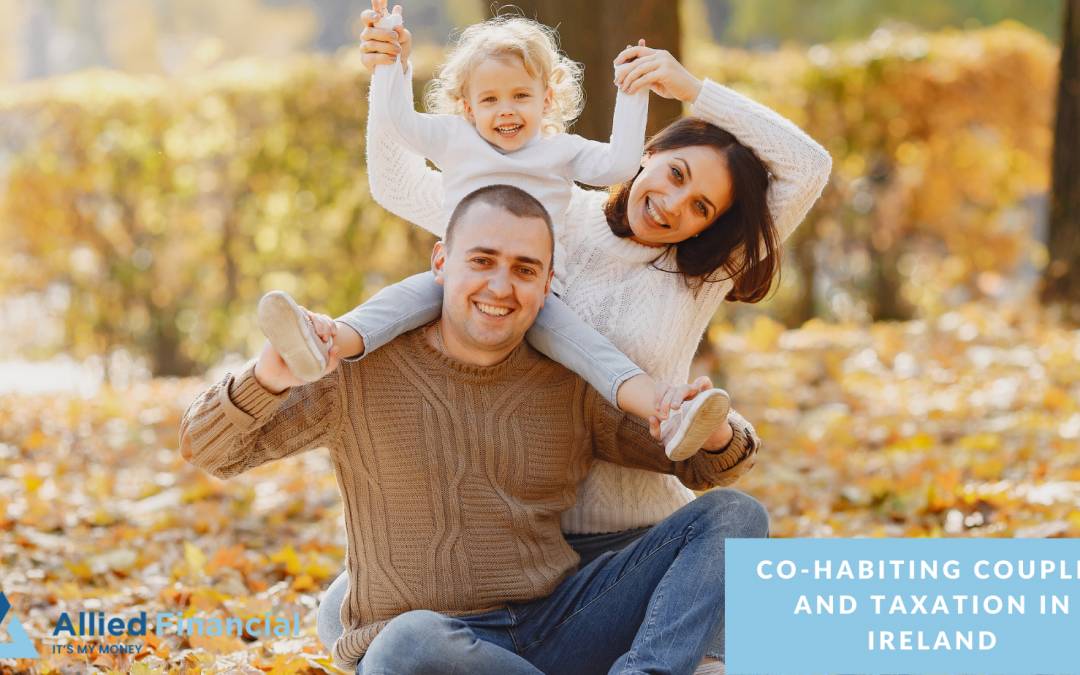 According to the Central Statistics Office (CSO), the number of couples co-habiting has been on the increase. Of the 1.22 million families in Ireland (Census 2016), over 152,000 couples are counted as cohabiting which is an increase of 6% since 2011. The number of co-habiting couples with children in rental accommodation increased by 37.6% to almost 40,000 families.

From the Civil Partnership and Certain Rights and Obligations of Cohabitants Act 2010 a cohabiting couple is defined as “one of two adults, who can either be of the same or opposite sex, who live together as a couple in an intimate and committed relationship and who are not related to each other.” When co-habiting couples wish to take out policies of Life Insurance, care needs to be taken to ensure that there is no potential liability to CAT.

There is a misconception that the Civil Partnership & Certain Rights and Obligations of Cohabitants Act 2010 gave co-habiting couples the same tax advantages as those available to married couples or Registered Civil Partners, but it didn’t. The Act did give co-habiting couples the right to claim from a deceased partner’s estate but did not allow them to enjoy the same tax advantages that married couples enjoy and and therefore any transfers of assets may be subject to Capital Gains Tax and Capital Acquisitions Tax (CAT). The Threshold which applies to them is Group C, i.e. €16,250.

The CSO again tells us that the average man is 36.1 years old when getting married, while the average woman is 34.1 years old but the average age of a first-time buyer in Ireland was 34 in 2016.
This suggests that younger couples first purchase a property together, with a view to possibly getting married in the future. In Ireland, married couples and registered civil
partners (RCPs) enjoy a number of tax advantages which are not available to single people. They can choose as to how they are assessed to income tax which will produce the best tax advantages for their own personal circumstances. Further to this a married couple or RCPs can transfer assets between them free from Capital Gains Tax, Capital
Acquisitions Tax and Stamp Duty. When co-habiting couples wish to take out policies of Life Insurance, care needs to be taken to ensure that there is no potential liability to CAT.
However, there is a differentiation between the types of policies that co-habiting couples may want to take out. These could be listed as follows:
• The Mortgage Protection policy
• A level term policy to cover assets or loss of income
Each type of policy may give rise to a CAT liability, on the basis that the surviving partner is

(a) beneficially entitled to the sum insured and

(b) the sum insured is in their possession.
These are the two criteria which need to be satisfied for CAT liability to arise, from Section 10 of the Capital Acquisitions Tax Consolidation Act 2003, (CATCA 2003) which sets out that a person becomes chargeable to CAT on an inheritance when a person becomes “beneficially entitled in possession on a death to any benefit (whether or
not the person becoming so entitled already has any interest in the property in which such person takes such benefit), otherwise than for full consideration in money or money’s worth paid by such person”.

The Mortgage Protection policy
Couples will often purchase a property, with a view to living together before getting married at a later date. The lending institution will insist on a mortgage protection policy being put in place and assigned to them, prior to releasing the cheque for the property.
When the policy is assigned to the lending institution, the relevant sum insured is payable directly to the lending institution in the event of a claim. The co-habiting couple generally do not receive the sum insured and the mortgage is cleared by the policy.
In this case, the two criteria required for a CAT liability do not arise, i.e. the surviving partner does not have beneficial entitlement to the sum insured nor is it in their possession so it follows that no CAT arises on the sum insured, provided the full sum insured pays off the mortgage.
If there is any balance over the mortgage amount and the relevant sum insured, this may give rise to a CAT liability when repaid to the surviving partner.
Where the policy has not been assigned to the lender, then a CAT liability will arise as the surviving partner will have beneficial entitlement to the sum insured and it will be in his/her possession. Once the mortgage has been cleared, consideration should then be given to the other assets that may be passed between the couple. Further to this, does the Dwelling House Exemption apply on the inheritance of the house?

The other assets passed between the couple would generate a liability to inheritance tax where the value of those assets exceed €16,250. In the situation of a young couple buying a property together, where the property is owned under Joint Tenancy, half of the property would be inherited by the survivor, should one die. The Dwelling House Exemption may come into play, but if the survivor has lived in the house for three years prior to the inheritance, a CAT liability may arise.
This is an area specifically related to young couples living in their first property with plans to get married at some date in the future. The conditions for the Dwelling house exemption include a need to have lived in the property for a least three years prior to the inheritance, to avoid a potential inheritance tax liability arising.

The conditions for the Dwelling House exemption are as follows:
• the dwelling house must be the principal private residence of the disponer at the date of his or her death;
• the dwelling house must have been continuously occupied by the beneficiary as his or her only or main residence for a period of three years immediately preceding the date of the inheritance;
• the beneficiary must not be entitled to an interest in any other dwelling house at the date of the inheritance; and
• the beneficiary must continue to occupy the dwelling house as his or her only or main residence for a period of six years after the date of the inheritance.
Many queries do arise about the fact that, if the three year rule cannot be satisfied, a liability to inheritance will befall the surviving partner who may only have the choice of selling the property to cover the tax. Often though, a short term level insurance policy with a term of 3-4 years is taken out, to cover this potential tax.
A Level Term Insurance policy can cover that potential tax arising on the inheritance of the house, but also for other assets that are passed between the co-habiting couple. For those couples who are long-term co-habitants, assets passed between them will equally give rise to an inheritance tax liability.
A common misconception is that long-term cohabitants can enjoy tax advantages if they are deemed ‘common law spouse’s’.
This is correct for some other jurisdictions in the world however not in Ireland. The Term ‘common law’ has no relevance in Ireland so what assets passing between them will give rise to inheritance, considering the threshold of €16,250.
There is a further need for insurance to cover loss of income, like any married couple, especially where there is one ‘bread-winner’ or main income provider. A death in any relationship can result in income loss and deprivation and lifestyles can be severely curtailed. So, a solution for this would be for the co-habitants to take policies of life insurance, on each other’s lives. This is typically referred to a ‘Life of Another’. Each partner in the co-habiting relationship takes out a policy on their partner’s life, that is Partner A takes out a policy with Partner B being Life Insured. Partner B takes out a policy on the life of Partner A. The key is that each partner pays the premiums for the policy they own which will mean no inheritance tax arises on the policies.

Example
Fred and Wilma are living together for several years, with children but never had the opportunity to get married. Fred is the main breadwinner, employed by a local company. His salary is the basis for the main income coming into the family.
Fred also has assets which will pass to Wilma should he die, which includes a Death-in-Service (DIS) benefit from the company.

Wilma works part-time in a local grocery store, earning around €1,000 a month so has her own income to pay for any insurance premium. Based on the estate value above, a potential tax of €74,497.50 [(€242,000 – €16,250) x 33%] may arise for inheritance tax alone. This does not consider what loss of income might also be covered.
If Wilma was to be the policy owner of a policy, with Fred as life insured and Wilma paid the premiums, then in the event of Fred’s death the sum insured would be payable to Wilma. No inheritance tax would arise as Wilma is receiving the value of a policy for which she has paid. The sum insured could be used to pay off the inheritance tax liability but also to cover loss of earnings as a result of Fred’s demise.
Other options that might be explored would be a Section 72 policy, set up by Fred under S72 trust for Wilma, to pay off the inheritance tax liability. However the loss of income would be another matter for a separate policy. Let’s not forget there is always the opportunity for them to get married, which alleviates all tax pressures as all assets can pass between spouses tax free.

In Conclusion, with this amount of information and to clarify whats best for you if you are a co-hibiting couple, it is recommended you reach out to your financial broker.

Allied Financial will ensure the needs of our clients,
Trace whatever tax liability You may face in the event of either dying, and
Put a structure in place that will ensure the proceeds of policies are paid out in the most tax efficient manner for our clients.

Call the team at Allied Financial Now and ensure you have the correct structure in place best for you and best for your family.

This website uses cookies to improve your experience while you navigate through the website. Out of these, the cookies that are categorized as necessary are stored on your browser as they are essential for the working of basic functionalities of the website. We also use third-party cookies that help us analyze and understand how you use this website. These cookies will be stored in your browser only with your consent. You also have the option to opt-out of these cookies. But opting out of some of these cookies may affect your browsing experience.
Necessary Always Enabled
Necessary cookies are absolutely essential for the website to function properly. This category only includes cookies that ensures basic functionalities and security features of the website. These cookies do not store any personal information.
Non-necessary
Any cookies that may not be particularly necessary for the website to function and is used specifically to collect user personal data via analytics, ads, other embedded contents are termed as non-necessary cookies. It is mandatory to procure user consent prior to running these cookies on your website.
SAVE & ACCEPT